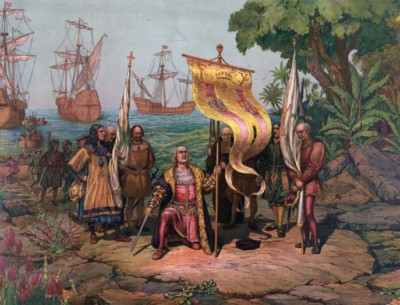 My answer is – not quite.

If we make a space to look under the covers, we will begin to notice that many of these injustices have deep roots in our history – and my simplistic summary is ‘colonialism’ and ‘imperialism’. For Canadians, we need look no further than ‘our Queen’ on our money – and all the land stolen from indigenous peoples is mostly ‘Crown land’.

Simply, white economic (and military) powers implemented colonial take overs of almost every region of the world – beginning about 500 years ago. Assumptions of cultural and intellectual superiority were a foundation. Christian missionaries led the global assault – followed by military interventions and economic empires. The brutality of colonial repression was (and remains) an almost invisible reality to our mainstream society. But the devastation continues.

My friend in Uganda helped me to understand the complexity of comprehending the issue. Deeply grounded in African traditions, he also benefited from a western education – so he actually balances different perspectives on reality. He is personally committed to rebuilding the culture and language of his people (a foundation for their survival). On the journey, he has discovered that he cannot do that kind of thinking and planning in ‘English’. When he ‘thinks’ in English, he cannot comprehend, explain or even understand his own foundation of the 6000 years of values and traditions with which he grew up.

Our brains are equally trained to a style of thinking that makes some things obvious – and others virtually invisible. The oppression of indigenous peoples in Canadian history is a remarkable example. It was redacted from the records, extracted from our ‘education’ – and now we privileged settlers are genuinely confused and challenged by our own history. We desperately want to say – ‘it never happened’ and ‘Can’t you just get over it?. We have apologized’. But the colonial framing, like a virus, is deeply embedded in our DNA. We have a physiological & psychological blind spot that virtually prevents us from what is in plain view while our wealth – our privilege is founded on this oppression. I am a beneficiary of this history of colonialism, as are many of us.

One does not have to be a history buff to begin to see patterns of oppression – by many European powers – over centuries. That is how Europeans came to be so rich – financially – and so arrogant ideologically. We collectively came to believe that these “other peoples” were inferior, sub-human – nonhuman. We treated them accordingly. We ‘occupied’ (stole) their lands and claimed ownership of continents, resources and peoples, as if they had never existed. We created policies to make them ‘disappear’ – disappearing by absorption or making them extinct.

Some of the policies were simply vicious. Mass extermination; lopping off hands; massive enslavement; introduction of diseases; and over time, policies of cultural genocide. Eliminate language and culture, destroy families, create systems of apartheid (a Canadian prototype).

In Canada, the hidden shame of Residential Schools is slowly being revealed. But remarkably as these schools closed (the last in 1996), a V2 second version was immediately invented and implemented – now known as the 60’s Scoop. And when that was ‘outed’, we upgraded Child Welfare systems to continue to shatter indigenous families – sponsoring this vastly expensive system of apprehension – rather than investing in equity and family support. So, colonialism, like a virus – continues to mutate – and remains virulent.

Canadians like to believe that slavery was an “American’ thing. That is also a lie. The foundation of North American wealth (along with the other colonial powers) was the slave trade – which provided virtually free labour to produce goods for the colonial masters. When slavery was made illegal, it was ‘adapted’ into a modernized serfdom that sustained the same pattern of oppression generating wealth for the masters, and poverty for the essentially racialized minorities.

An illusion that is crumbling in this global pandemic is that we all have the opportunity to make our own way – to pull ourselves up by our bootstraps. That too is a lie. Structural inequality predetermines that the majority of folks are getting poorer – with fewer opportunities. In staggering numbers, millions of citizens lack stable housing, decent food and a viable income. And yet, too often our public perception is that ‘folks are lazy’, welfare cheats, etc.

A radically different interpretation is that our colonial imperial history has traumatized vast numbers of people. They live in poverty, sub-standard over-crowded housing, surrounded by violence as a survival strategy. People whose culture has been decimated by policy for centuries have few options. This is the reality of the majority of racialized minorities, indigenous peoples, people living with disability labels – and yes our aging seniors.

Right now, we are witnessing entirely predictable and preventable exponential death rates in ‘congregate facilities’, infested with the Covid 19 pandemic – places where we have hidden people that give us discomfort away from plain sight. Old Folks homes; group homes, prisons, residential facilities with many labels – where we have ‘institutionalized’ folks who need supports. Places where staff are systematically under-paid and over-worked to provide even the most fundamental of life supports. And now, both residents and staff, are infested with the Covid 19 and are dying in droves.

Slowly, we are beginning to acknowledge the impact of our systemic neglect. In fact, it is ‘same old, same old’. The imbedded colonial brain dictates that we quietly (sort of unintentionally) sidelined various groups of people that we didn’t value highly. People of colour, immigrants, indigenous people, people with disabilities, the elderly, have been set aside, put aside – while we thrive on the profits of their labour. Remarkably, right now, there is a turn of the pandemic screw. Our health and wealth, our survival depends on many of these folks who for minimum wage keep our systems going so we can have fresh food, transportation, garbage pickup and more..

As we emerge from this pandemic (and we will emerge in time), there is a crack in the colonial models of oppression. We have been forced to notice that our comfort relies on ‘the working class’ – who we have systemically treated as an underclass. With this new awareness, there is an opportunity to rejig our system so that that all workers get a living wage; all citizens live in reasonable housing; health care is available to all; people with disabilities and seniors can live safely and comfortably in our communities. Because of the tragedy of this virus, we can no longer claim ignorance. And with that awareness, we can dream and collaborate to build a different and better world – for all. Such pipe dreams are now entirely possible. It is up to us.

We can begin today.. building this ‘alternative universe of caring’. The first step is within each of us – in our soul. We have work to do. And then we can reach out (including virtually) to our families, our neighbourhoods, our communities. And by expanding and nurturing our webs of relationships, we will be collaborators in creating this new world. And that new world will be a place we care for each other – and for the planet we live in. We want to build a ‘new normal’ based on respect, dignity and equity. We must not slide back into the deep ruts of the old normal.

The time to begin our personal and planetary escape from the clutches of colonialism is now.