For more than 20 years family groups in Ontario have created and benefited from a variety of effective approaches to Independent Facilitation.

In 2014 The Ontario Independent Facilitation Network (OIFN), with funding from the Ministry of Community and Social Services (MCSS), initiated an Independent Facilitation Demonstration Project to discover how this grass roots social innovation can develop and contribute to the transformation initiative which implements the Services and Supports to Promote the Social Inclusion of Persons with Developmental Disabilities Act, 2008 (SIPDDA). 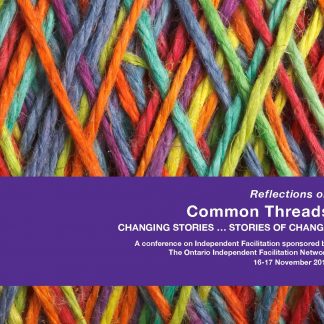 You're viewing: Reflections on Common Threads – ebook $0.00
Add to cart