Members of Each Other:  This book is stories about working with people with developmental disabilities. But it is the same message for all of us. This book exposes the dangers of power, of isolation, of helplessness. It also challenges and gives hope for communities to take back control from the ‘professionals’, to themselves. It has tried and true tools to help to build the future. This is a ‘must read’ for any one working in this field. It’s also a great read for anyone who wants to be a fuller human.

Members of Each Other:  John and Connie have done it again. This book is stories about working with people with developmental disabilities. But it is the same message for all of us. This book exposes the dangers of power, of isolation, of helplessness. It also challenges and gives hope for communities to take back control from the ‘professionals’, to themselves. It has tried and true tools to help to build the future. This is a ‘must read’ for any one working in this field. It’s also a great read for anyone who wants to be a fuller human. 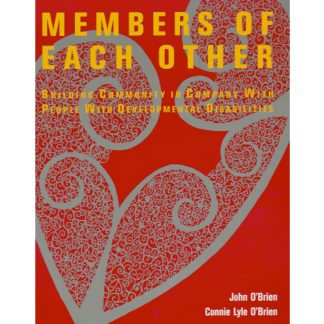 You're viewing: Members of Each Other $25.00
Add to cart
Join Waitlist We will inform you when the product arrives in stock. Please leave your valid email address below.