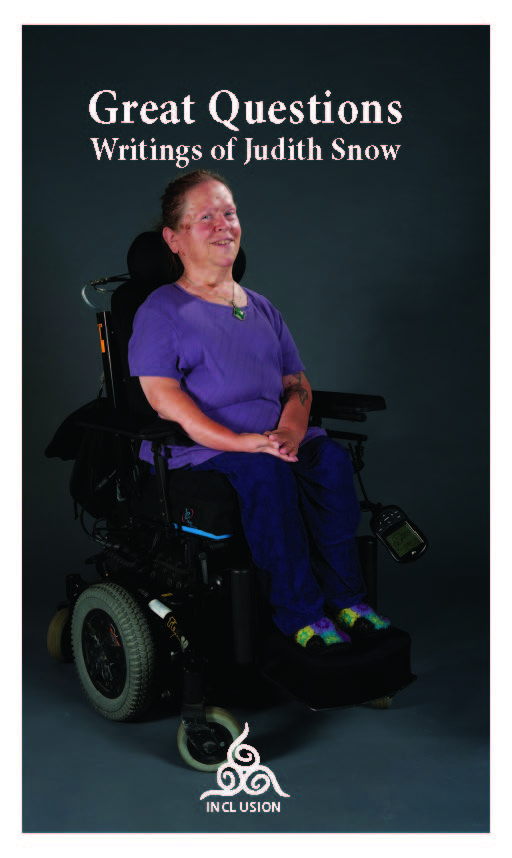 JUDITH SNOW October 29, 1949 – May 31, 2015 The colours of Judith Snow were vibrant, flagrant, unabashedly in the forefront of the forefront: a social inventor, a trailblazer, a relentless advocate for inclusion. She championed communities that welcome diversity, including all persons with disabilities, especially people who do not speak in voice, as full contributing citizens in communities. She was an unstoppable dreamer, an courageous instigator, motivator and challenger. She was a visionary, a muse, an author, a speaker, an actor, an artist. Born with quadriplegia, Judith advocated for and attained the first ever government funding to pay directly for her attendant care. This precedent in Canada and the world has liberated people around the globe. She inspired and founded the Joshua Committee – to liberate herself – and this led to the creation of Circles of Support around the world. She was a founding member of the Marsha Forest Centre and of the Individualized Funding Coalition for Ontario. She created Canada’s first post-secondary learning support program at York University. As an author, trainer and educator for over 40 years, she travelled widely: the US, UK, Europe, the Caribbean and Canada. Judith’s impact remains worldwide. As a faculty member with the Asset-Based Community Development Institute and a founder and leader of numerous community-based and non-profit organizations, Judith has supported and led community development locally and internationally. In 2003, Judith developed Laser Eagles Art Guild and discovered that she was a visual artist herself. Judith inspired us all with her incredible gifts of spirit, wisdom, skill, revolutionary insight and unquenchable positive energy. She was a powerful, energetic instigator of community action and peace. Judith is forever a doorway opening to a world that sees different, looks different, thinks different, is different, embraces difference. She was funny, a dear friend, a philosopher, a leader. Her entire life was dedicated to the vision: “There really is no disability: People are always contributing something. The work is to see the value and potential in what they are contributing and build that through relationships into community and economic opportunities.” And in Judith speak: “”You think too small.” Judith’s family and loved ones want to honour her life at her funeral, which will be held Saturday, June 6th at 1:30 p.m. at Metropolitan United Church, 56 Queen Street East in Toronto. In lieu of flowers, donations can be sent to the Individualized Funding Coalition for Ontario, c/o 611 – 695 Coxwell Avenue, Toronto, ON M4C 5R6.